I spend a lot of time writing about tiny blue orange, my clients + how entrepreneurs can rock their wordpress sites/online presence more than they already are. But I don’t really write about the second in command at tiny blue orange – Brutus Callahan.

If you follow me on Instagram, Facebook or Twitter, you’ve likely seen more than a few photos of this handsome dude. and while a picture is worth a thousand words, I wanted to give you a little background on the bullmastiff that is in charge of security around here. 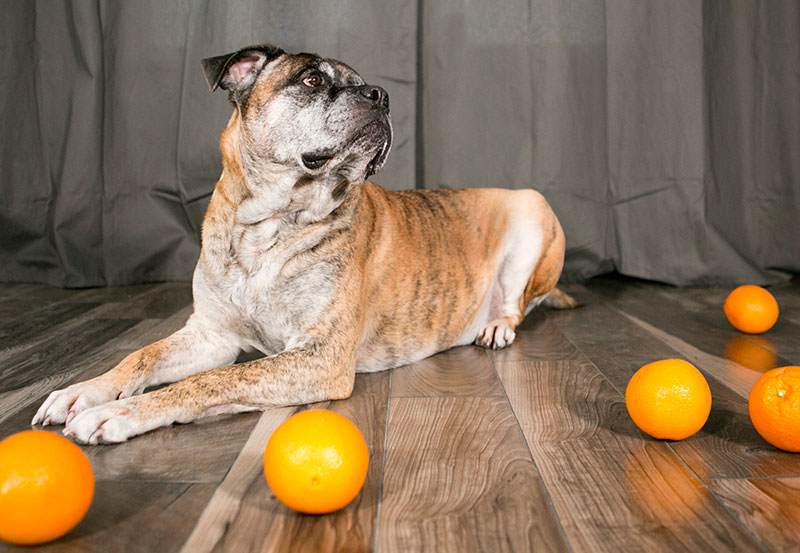 Just over 2 years ago, I was given the opportunity to adopt Brutus from a family that wanted to give him a chance to have a life with less travel, less kennel time + way more naps. After meeting him there was no way any other dog would do, so I was thrilled to bring him home.

While the name Brutus fits him perfectly because of his brute size, he is named after the Ohio state mascot which is where he is from. I’ve also kept his last name from his previous family, partially because he has his very own Facebook page.

At just over 100 pounds, he is a hearty dog but really, all love. I’ll never forget the first time he met my niece who was 3 at the time. We were all a little tentative about the meeting since he’s as tall as she was + clearly much stronger. But within a few minutes, he was licking extra peanut butter + jelly sandwich off of her face and they have been best buds since.

Not too long after getting Brutus, I made the leap to full-time self-employment from part-time. It was then that we really bonded + developed our roles as “coworkers”. He spends the day chasing the sunlight around the office, letting me know when it’s time to take a break + listening to me if I need to talk something out. We also have daily morning meetings outside where we discuss current projects + upcoming goals. You might think I’m being funny, but it’s the truth. Sometimes talking out loud to someone or something that can’t reply is the best way to hash out ideas. I certainly don’t take him for granted!

Because of my addiction to taking pictures of Brutus, he’s become a little bit of an online celebrity. Many clients + vendors will ask about Brutus on a regular basis and we’ve been sent more than a few care packages just for the biggest drooler in the office. {That’s Brutus, in case you were wondering.}

Aside from being known as a website guard dog, he’s also been compared to Clive Owen. i’ll let you judge that comparison for yourself.

photo of clive owen from fanphobia.net.

Aside from security + sun chasing, Brutus {or bruty b as I often call him} loves apples, peanut butter, sweet potatoes + carrots. He really is a sucker for all things food. His favorite music to listen to in the office is rap followed by old school r&b. He’s also become quite a fan of patrolling the yard + meeting all of the dogs in our new neighborhood. The smaller the dog the better, in his opinion. Sometimes I wonder if he knows that he weighs more than 20 pounds.

Learn even more about our business

Get weekly WordPress tips, on the house!